Skip to Main Content
It looks like you're using Internet Explorer 11 or older. This website works best with modern browsers such as the latest versions of Chrome, Firefox, Safari, and Edge. If you continue with this browser, you may see unexpected results.

You have access to so many resources without ever leaving the comfort of your own home!

Travel to your local cemeteries for a glimpse at the lives of your relatives. Sometimes people from the same family will be buried near each other. Other times a couple's children will be listed on the back of a headstone. Remember, however, that information on a headstone is considered a secondary source, and that this information can be wrong! Consider using Find a Grave for a listing of cemeteries by county.

Afro-American Historical and Genealogical Society Jean Sampson Scott Greater New York Chapter: use the links provided by this genealogical society to learn about the African American experience and trace black family history. This link will take you to a page on their site called 'Links in the Chain.' Scroll down and explore menu options such as Enslavement, Genealogical Research, Historical Research, and New York City & State.

Castle Garden: this database contains records of 11 million immigrants who arrived in the Port of New York from 1820 to 1892.

Ellis Island: this database contains records of passenger manifests for Ellis Island and the Port of New York between 1820 and 1957.

Fold3: [requires an NCLS library card to sign in] access original military records, stories, photos, and personal documents of the men and women who served in the Revolutionary War through recent wars.

Fulton History: search this database when looking for digitized newspapers.

New York Heritage Digital Collections: explore and learn "more about the people, places, and events that contributed to the making of New York State."

New York State Vital Statistics: use the Internet Archive to access a collection of scanned microfiche. Be aware that NYS did not require official records to be kept before 1881! Some towns, villages, or churches may have kept their own records prior to that date, but legally it was not a requirement. [Curious about when other states passed a law requiring documented vital statistics? Check the photo to the right!] 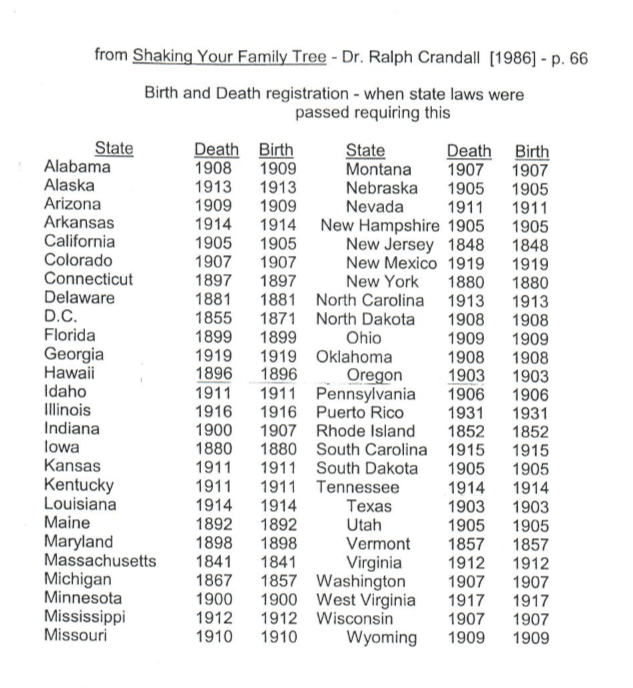 Old Houses of the North Country: this collection, hosted by the New York Heritage database, features Watertown Daily Times clippings from 1941 to 1956 that were written by David F. Lane.

Watertown City Directories: explore digital copies of directories from 1855 to 1916 (non-consecutive) to get an idea of what a neighborhood looked like. Be aware the the library has many other years in its physical collection.

Watertown High School Yearbooks: hosted by the New York Heritage database, this collection features issues of the Annual published between 1907 and 2010.